Source of Electricity Generation in the US

Email ThisBlogThis!Share to TwitterShare to FacebookShare to Pinterest
Natural Gas Replaces Coal as Main Source of Electricity
U.S. Energy Information Administration announced that "This year, natural gas is expected to supplant coal as the No. 1 source of electricity in the United States. Gas will supply 33.4 percent of power, and coal will contribute 32 percent", the EIA projected in the March installment of its Short-Term Energy Outlook.
“This would be the first time that natural gas has generated more power than coal on an annual basis,” the agency says. Natural gas beat out coal during several months last year, but beating it out for the year is another matter and far more momentous.
Posted by Guy Mannino at 5:58 AM 1 comment:

THE FUTURE OF LNG

Deloitte Consulting's report on LNG titled "LNG at the Crossroads" gives an accurate overview of the
ever-evolving LNG business. LNG has gone through a classic case of boom-bust.
We experienced an impressive growth and now we are going through a phase a major restructuring.

LNG global trade has quadrupled in the last 20 years and is expected to further double in the next two decades mostly from the US and Australia, according Deloitte Consulting LLP. The report outlines the seven key factors that will shape the LNG industry in the years to come:
With these changes, it is imperative to understand the industry’s strengths, weakness, opportunities and threats. LNG ventures are prone to cost overruns and delays, according to the report. The best example is Chevron Corp.’s Gorgon LNG in Australia which has exceeded its budget and timetable.
New technology improvements make it possible to unlock value from increasingly smaller fields and markets, according to Deloitte. Growing demand is expected from small-scale regas in isolated markets or as transport fuel for heavy-duty trucks, trains and shipping
LNG makes it possible to monetize stranded gas reserves and provides more predictable cash flows and diversification compared to the traditional exploration and production business.  The Galileo Cryobox offers an advanced technology permitting a easy entry in the LNG market with lower capital investment than the conventional production plants and the flexibility of a modular production. Furthermore Cryobox can start and stop withing 30 minutes offering great demand response. 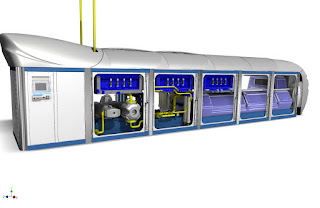 Today the Wall Street Jounal has an article titled "Chevron LNG Bet Meets Big Chill".
The total investement of the  Gorgon project mushroomed from $37 to $57 billion.
The installed capacity is 15.6 million metric tons per year. Chevron now faces lower than expected demand due to cool down of the economy in China and low gas prices.

We think a more decentralized production strategy of LNG is actually more efficient and less costly.
The Galileo Cryobox is easy to install and produces on demand with minimum personnel. Each module can produce 4,500 metric tons per year. In the pictures below the San Vincente plant in Argentina produces 32,000 metric toms per year. One operator manages the plant and all activity can be remotely controlled via Galileo SCADA. 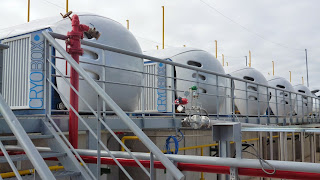 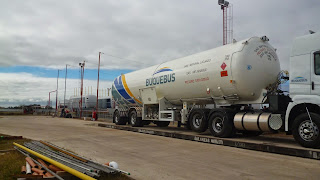 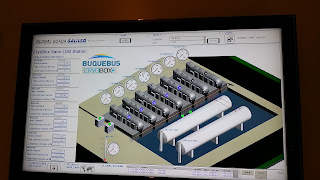